Dragon’s blood (Croton lechleri Müll Arg), (Syn C draconoides Müll Arg) [family: Euphorbiaceae] is a large tree (10-20 metres) which grows in South America in the upper regions of the Amazon. Native to Peru, it can also be found in surrounding countries including Colombia and Ecuador. It is a fast growing tree, growing 10-15 metres in just three years.

The tree and the traditional remedy take their name from the colour of the sap, which is dark red, and it is the resinous sap of the tree that is the source of the observed medicinal efficiencies.

The sap of the Croton lechleri tree has a long history of ethno-traditional practice in Peru. History notes that the plant has been used since prehistoric times as a therapeutic agent and written records from Spanish explorers dating back to the 1600s show the use of dragon’s blood by indigenous tribes.

Indigenous healers and doctors recommend this remedy to help treat both internal and external problems but the main traditional uses are the relief of diarrhoea, stomach ulcers and cancer and the treatment of insect bites (itching, pain and swelling).

Local medicine men believe dragon’s blood to be the remedy for all skin problems: cuts, insect bites/plants, burns, wounds and other injuries. It has also been documented that dragon’s blood contains antimicrobial (antibacterial and anti-fungal) and anti-virus properties. And dragon’s blood sap can be applied direct to any wound to help stop bleeding, speed wound healing, aid wound closure and protect against infection. The sap dries to form a barrier in the form of a second skin.

It is not necessary to cut the tree down in order to harvest the sap with the active, thus allowing for a strategy to be put in place for sustainable harvesting. To collect the sap, a notch is made diagonally across the trunk, like with the rubber tree for latex, and the red sap flows immediately. The sap is collected in cups at the bottom of each notch; small bottles of raw sap can be found in local markets for all daily domestic applications. The raw sap is filtered, pasteurised and transformed into powder by spray drying, or kept in a liquid form.

Naturally harvested in the forest, this ingredient is free from pesticides, preservatives or other chemicals. In addition the exploitation of this natural resource by the local people is of great economic benefit to them. Their cooperation is essential to ensure consistent quality throughout the year and to ensure the sustainability of the resource. 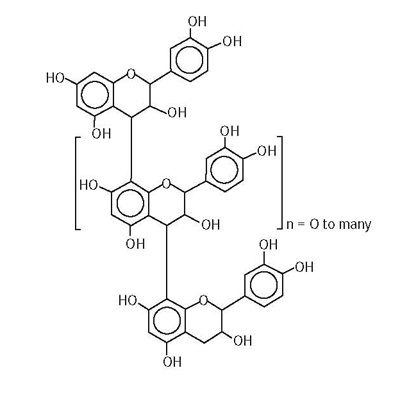 The sap of Croton lechleri is made up of many rich compounds, but the polyphenols and taspine are the most important due to their quantity and activity. Large variations can be found depending on the geographical origins of the crops. For example, taspine levels can vary from trace to over 5% (in dry basis) in the sap.

The polyphenols present in the sap of dragon’s blood are mainly from the proanthocyanidins family structure.

Proanthocyanidins (PACs), oligomers and polymers of flavan-3-ols belonging to the family of flavonoids are known to contribute to the sensation of astringency and colour in fruits, vegetables and wine. These PACs, which are also found in many other plants, draw the attention of medical and pharmaceutical communities because of their possible effects on human health.

Many methods of analysis of these molecules exist, strongly influenced by the structure of PACs. But the most common and internationally recognised is butanolysis, or the Bate-Smith and Porter method, based on the property of PACs to depolymerise in acidic conditions. This analysis, when applied to the Naturex dragon’s blood extract, confirms the literature that reports contents >90% on dry sap. This extract is standardised to >50% PACs (spray-dried on maltodextrin as a carrier). 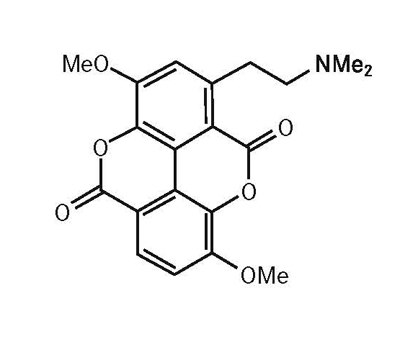 Taspine is an alkaloid which is described as the active ingredient in dragon’s blood due to its effect on wound healing. Numerous publications describe its mode of action by mobilising fibroblasts in the early stages of healing, without modification of the extracellular matrix

The taspine content of the extract is analysed using the HPLC method and confirmation of its molecular structure is assessed using the Nuclear Magnetic Resonance Spectrometer. The Naturex dragon’s blood extract is standardised to 2% taspine. 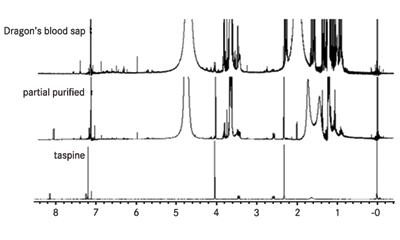 This dragon’s blood extract has strong antioxidant properties which can be demonstrated in two ways: biochemical and biological methods.

There are two biochemical methods that are used widely to evaluate the antioxidant power of an ingredient: DPPH (2,2-diphenyl-1-picrylhydrazyl) and FRAP (ferric reducing antioxidant power) methods. Both are based on the ability of a compound to scavenge a free radical or free electron from an oxidised donor (oxidant). DPPH radicals are purple when placed in a solution. However when the dragon’s blood extract is added, the solution turns clear, meaning that the free radicals have been scavenged. Table 1 gives an overview of ingredients with their corresponding antioxidant value (average of different batches) measured through the DPPH method.

In the same way, the FRAP method demonstrates that dragon’s blood scavenges the free electron in the Fe3+/Fe2+ redox reaction. The results (2500-3000 µmol trolox eq/g) are equivalent to some of the best known botanical extracts.

On the other hand, the antioxidant activity of dragon’s blood extract is demonstrated by its ability to protect human skin cells (keratinocytes) from oxidative stress generated by H2O2. This function can be biologically observed by measuring the expression level of JNK (Jun N-terminal kinase), a protein that plays a major role in cell life.

JNK, by phosphorylation, modifies the activity of numerous proteins that reside at the mitochondria or act in the nucleus. By activating and inhibiting other small molecules in this way, JNK activity regulates several important cellular functions including survival and apoptosis. A low JNK activation level in cells that have been exposed to an oxidative stress environment means that they are very well protected thanks to an efficient antioxidant system.

After incubation, a factor of oxidative stress (H2O2) was introduced into each culture medium. The level of expression of JNK was then followed by immunolabelling.

The antioxidant properties of this material are so important that oxidative stress was completely wiped out in the human cells in the culture. 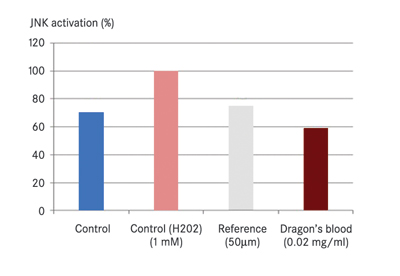 The purpose of this study was to demonstrate the activity of the ingredient on the healing function, on mechanically injured human skin explants. This activity was assessed through the observation of general morphology and by specific immunolabelling of the fibronectin, collagen IV, integrin B4, and collagen I and III.

The active ingredient was applied using a paper disk soaked with a solution of dragon’s blood, which was then placed on the skin explants.

Figure 6: Significant improvement of stratification and quality of the new epidermis

Observations were made over ten days and clearly showed the dragon’s blood to have a very high efficacy. Its active compounds improved the general morphology of the damaged skin whilst stimulating all stages of the healing process: reconstitution of the epidermis, reconstruction of the dermal-epidermal junction and finally filling the damaged area with collagen.

Through various modern methodologies it has been demonstrated that the traditional knowledge on dragon’s blood is well based.

The extract has a very strong efficacy with regards to each step of the wound healing process:
• Reconstitution of the epidermis and start of differentiation
• Reforming the dermal-epidermal junction by important synthesis of the fibrillar network of collagen IV, fibronectin and adhesion molecules integrin B4
• Filling of the underlying dermis by high production of collagen I and III

Dragon’s blood extract can be applied to all skin types, especially in conditions where protection from oxidative stress and healing are required. Mature skin can find some positive stimulation in slowing down metabolisms in order to return to well reconstructed structures. More specific applications for dragon’s blood could include sun products, as UV exposure can damage the skin and macromolecular network, as well as aftershave products and tattoo products, due to the extract’s strong healing properties. Dragon’s blood could also be used in lip care products to help protect against dry air, UV and cold weather during the winter.

Dragon’s blood extract is supported by a complete toxicological file (OECD tests) and is Ecocert validated.

***Any  statements on this website have not been evaluated by the Therapeutic Goods of Australia (TGA) or the  Food and Drug Administration (FDA). The information on this site is not intended or implied to be a substitute for professional medical advice, diagnosis or treatment. Please confirm any information obtained from or through this web site with other sources, and review all information regarding any medical condition or treatment with your physician. Never disregard professional medical advice or delay seeking medical treatment because of something you have read on this website. This information is not intended to diagnose, treat, or cure any disease.***